Racial equity can be defined as "the condition that would be achieved if one's race identity no longer influenced how one fares." (from "Awake to Woke to Work: Building a Race Equity Culture" by Equity in the Center). This collection focuses on racial equity and also includes works that explore the larger diversity, equity, and inclusion (DEI) framework. Our aim is to raise awareness about funding for racial equity efforts as well as activities in the social sector meant to realize racial equity. The collection is part of Candid's Funding for racial equity special issue website.

Know of content that should be considered for this collection? Please suggest a report!
Read more + 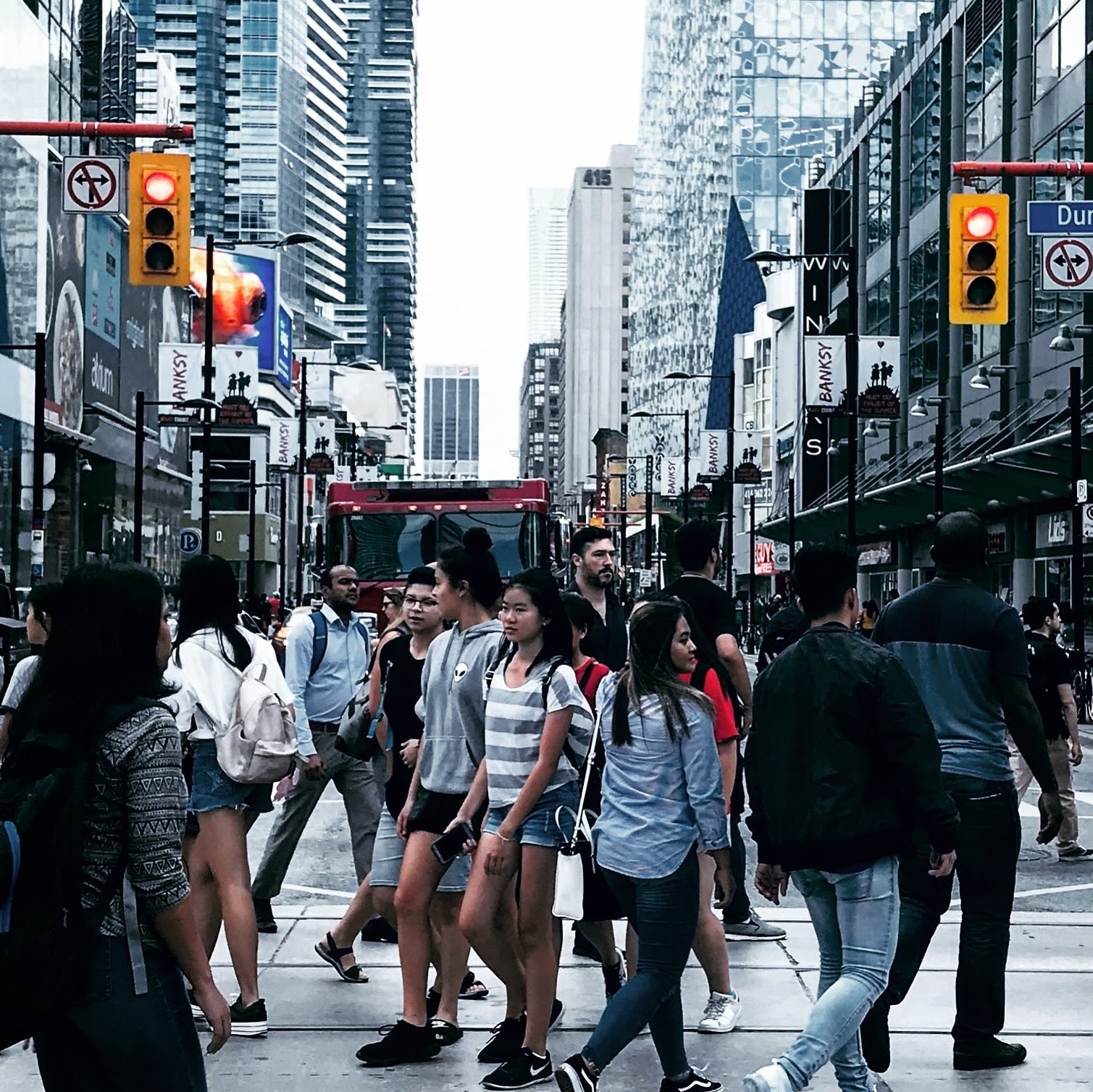 Photo by Rayhane saber on Unsplash 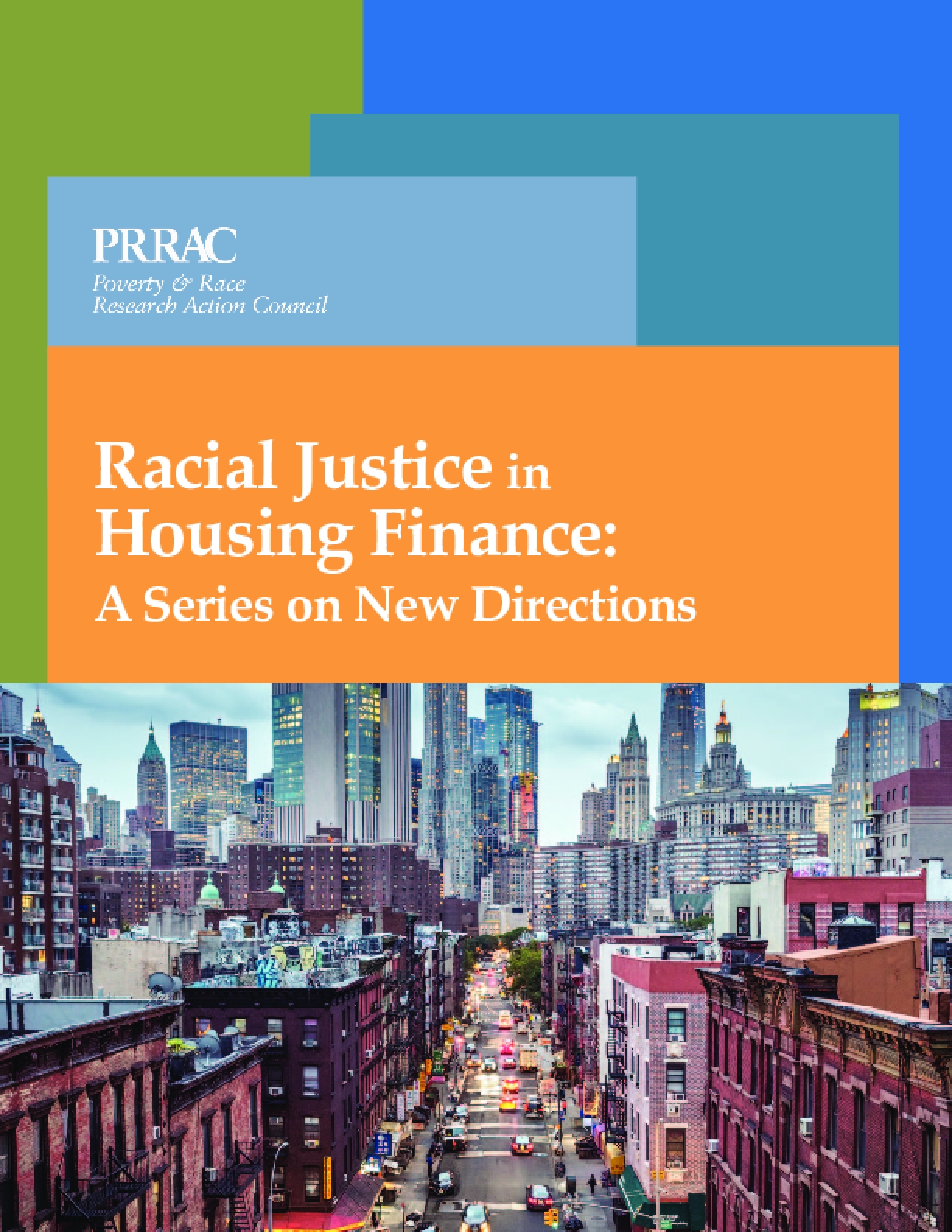 Racial Justice in Housing Finance: A Series on New Directions

The enclosed essays speak from a range of diverse viewpoints to explore how housing finance can be harnessed towards the ends of residential integration, equitable investment, and housing security, rather than purely for profit. Our authors offer ideas across a spectrum of proposed reforms. They describe how aspects of our current housing finance system derive from, or fail to correct for, our deep history of structural racism; they propose concrete steps toward re-engineering our current regulatory structure and housing programs to better advance equity, including addressing the particular harms of racial segregation; and they argue for expanded social housing and other visionary reforms.

Between 2017 and 2019, homelessness sharply increased by 43% in Alameda County, California. Housing market failures, homeless system challenges, and long-standing discrimination have produced a crisis in affordable housing and homelessness, which has significantly impacted low-income people and communities of color. The surge in homelessness and its disproportionate racial impacts, especially on African Americans and Native Americans, became the impetus for a revamp of the homeless system modeling process to ensure that it is restructured to employ a racial equity lens. With the goal of producing a homeless system that works better for all to end homelessness in Alameda County, this system modeling process seeks to: 1) Identify and address factors leading to the over-representation of people of color in the population of people experiencing homelessness. 2) Understand how facets of the homeless system benefit or burden people of color and pinpoint opportunities to advance racial equity within the system. 3) Formulate key elements of a model homeless system, including optimal types and quantities of housing units and service programs; and 4) Develop recommendations to more effectively and equitably allocate resources, prioritize investments, and advance proactive, targeted strategies to end and prevent homelessness. 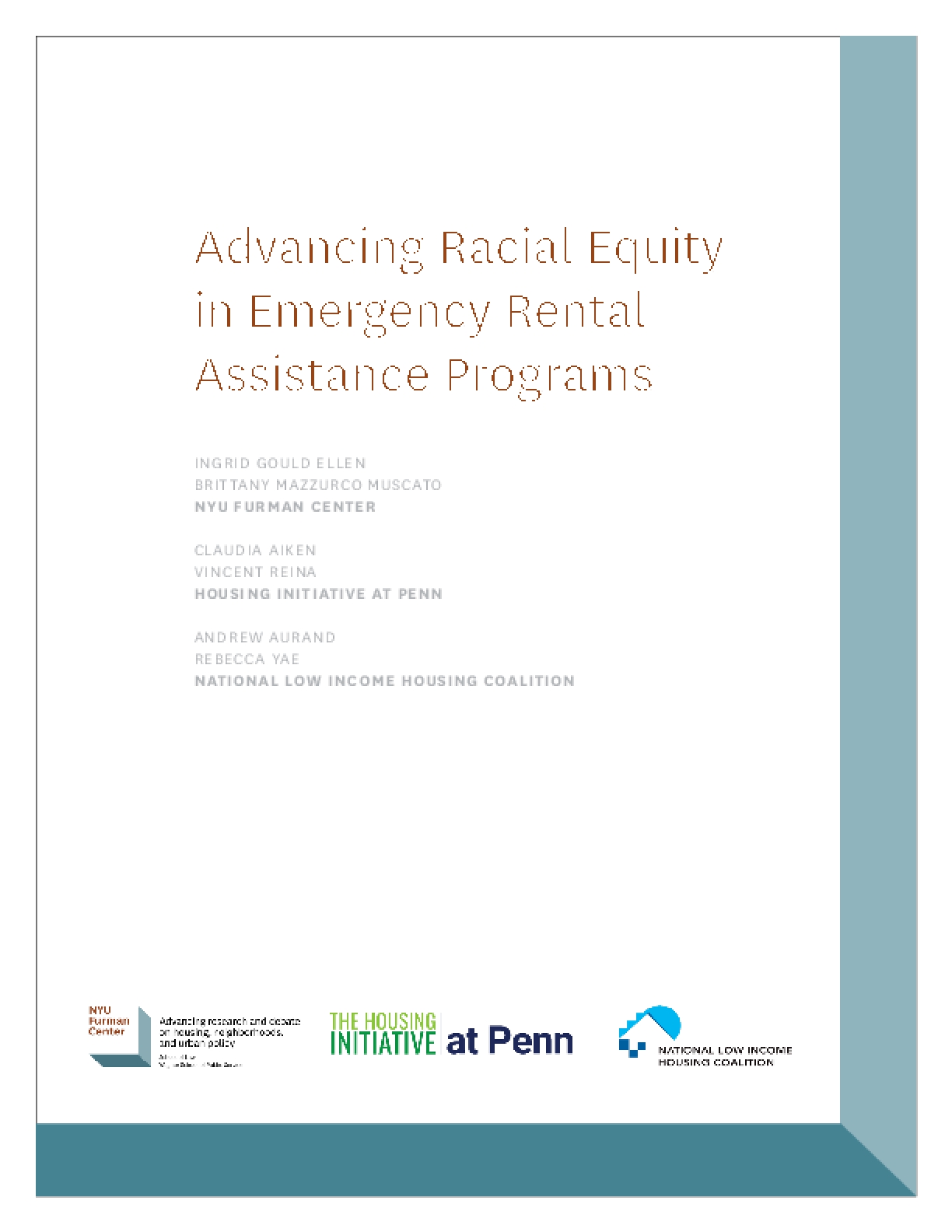 The NYU Furman Center, together with the Housing Initiative at Penn and the National Low Income Housing Coalition, recently co-authored a report describing these "first-generation" COVID rental assistance programs, based on a survey of 220 programs across the country. This brief draws upon the analysis from that survey, along with additional document review and interviews with selected program administrators. Based on these sources, the brief highlights several lessons about strategies states and localities can use to design and implement more equitable emergency rental assistance programs. 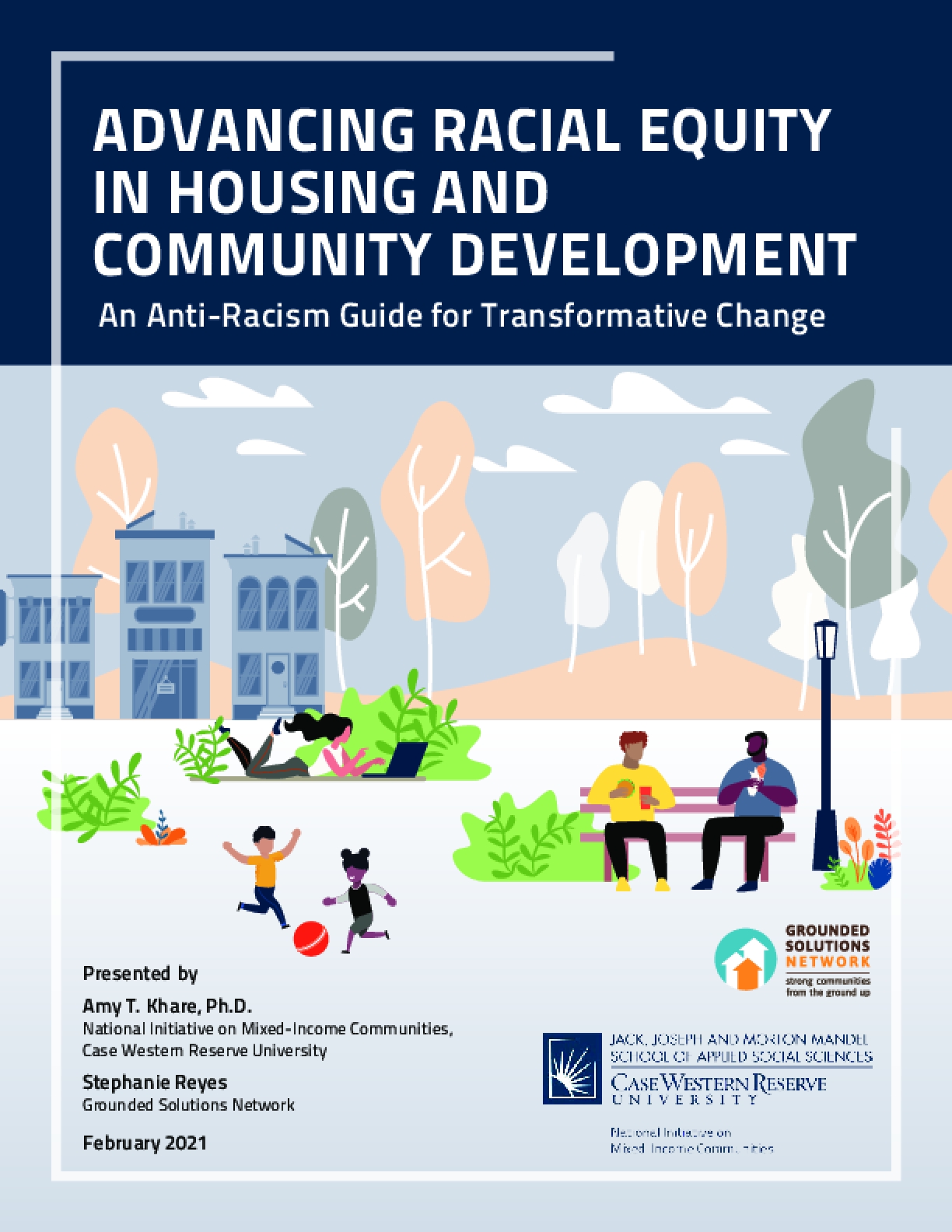 Racial equity will be achieved only through intentional actions and decisions. Even with intentionality, racial equity will be difficult to put into operation. Within the field of housing and community development, racial equity approaches intend to proactively address the enduring racism within contemporary policies, programs and practices that routinely advantage White people while further producing negative outcomes for people of color. Furthermore, racial equity approaches must also be focused to address the enduring racism within the private corporate sectors of the banking, investment, and real estate industries. Effective racial equity approaches also explicitly recognize the cultural assets, resilience, and strengths within communities of color. This means centering communities of color in the process of advancing change. 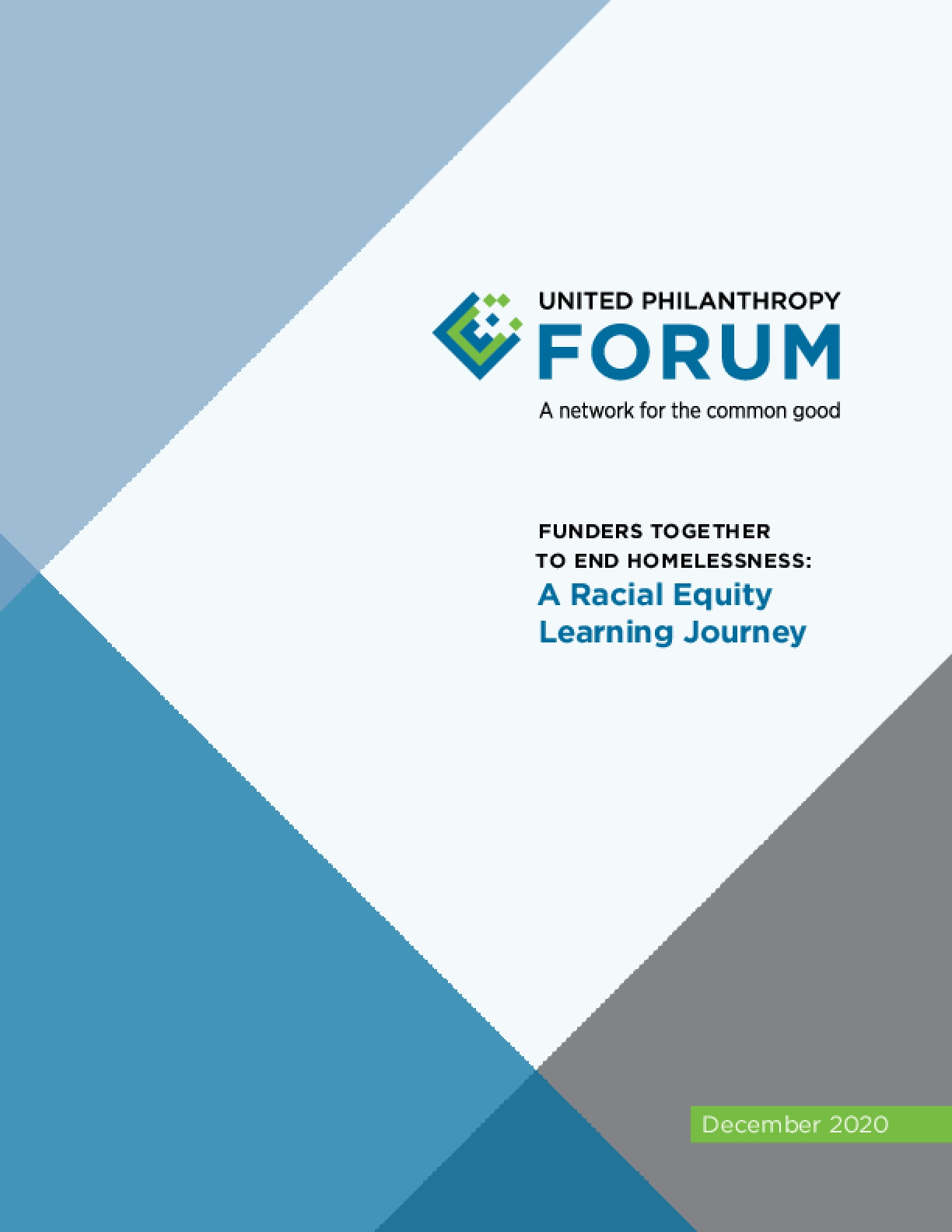 Funders Together to End Homelessness: A Racial Equity Learning Journey

Funders Together to End Homelessness began its racial equity journey in 2016. Its case story explains how the PSO named racial equity in its strategic plan and embarked on a learning journey together with its board, staff, and members to normalize the conversation about structural and historic racism and how it contributes to disparities in the homelessness system. The story also describes how Funders Together created a two-year community of practice, called Foundations for Racial Equity (FRE), that has been a critical part of its journey, and how its codified its racial equity work through the creation of its Commitment to Racial Equity. 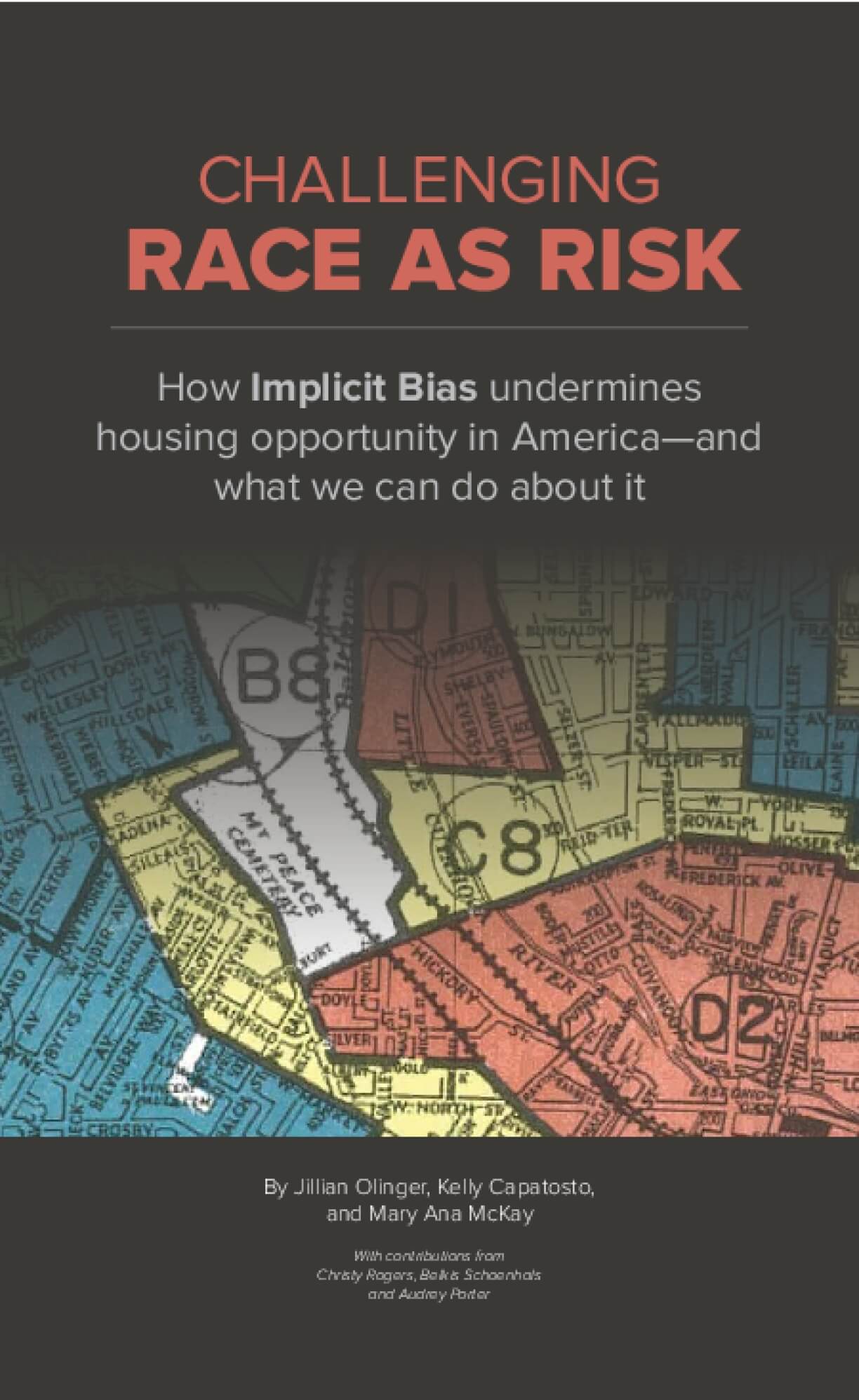 The ability to exercise agency over where one lives is a hallmark of freedom. And yet, this privilege has not been equally afforded to all. Race has been—and continues to be—a potent force in the distribution of opportunity in American society. Despite decades of civil rights successes and fair housing activism, who gets access to housing and credit, on what terms, and where, remains driven by race. This is important to our shared future, because investments in homeownership are multiple and generational. Indeed, research shows that the biggest factor in the Black-White wealth gap is years of homeownership, showing how critical positive home equity is to building wealth. Racialized systems that generate lasting inequality may perpetuate self-fulfilling expectations, where "structural disadvantages (e.g., poverty, joblessness, crime) come to be seen as cause, rather than consequence, of persistent racial inequality, justifying and reinforcing negative racial stereotypes."There is a clear record of the impact of structural racism on opportunities for people of color in home-buying and credit access today. Structural racism describes the process by which policies, organizations, institutions, systems, culture and history interact across institutional domains to produce and sustain racial inequality. In terms of housing and credit, racial residential segregation has been a critical structural force. For example, historically, people of color have been restricted from buying homes in particular neighborhoods, regardless of their ability to pay, through practices such as racial covenants or redlining. Today's exclusions are less overt, but segregation remains, thus limiting people from the benefits that we know attends living in neighborhoods of high opportunity. W.E.B. DuBois acknowledged one hundred years ago that the health of minority populations is heavily influenced by the social institutions around them.1 Not only do housing and credit form the lifeline for our national economy, but they serve as the economic lifeline for many of us individually. Housing and credit can influence our daily lives: the better one's access to safe, affordable housing, the better one's outcomes tend to be along a range of indicators of individual, family, and community well-being.

Use this form to customize and generate the code you need to display this content in your own environment - no programming required. The feed will inherit more specific styles, like font face and font color, from your website.

Please use the form below to provide us with your recommendation, and we'll check it out. Include your name and email address along with your suggestion just in case we need to get in touch. Thank you for contacting us.